Support Sickle Cell Patients In September and Beyond!

Before we hear from a Houston area sickle cell patient and what they go through, let’s talk about what sickle cell disease is. Sickle cell disease is an inherited blood disorder that affects red blood cells mainly in the African American population. Defective hemoglobin, known as hemoglobin S, commonly causes oval-shaped red blood cells to assume a sickle-like shape, from which the disease gets its name. One critical problem with these sickle-shaped cells is that they reduce the blood flow through the body, causing pain and life-threatening health conditions.

“Living with sickle cell is very hard and harsh,” Hannah Prince said. “The pain feels like, I’ve heard somebody say, it feels like glass running through your veins, but for me when my body gets cold, you could physically touch me and feel that I’m cold.”

Hannah, 22, is a Houston area sickle cell recipient. She’s been battling the disease since she was born, but it’s not stopping her from enjoying life. Hannah is a top student at Houston Community College where she studies psychology.

“What I plan to do with that, is go on and be a trauma specialist,” Hannah said. “I want to focus on sickle cell patients and other patients with chronic illnesses to help them understand what they’re feeling.”

There’s not really a cure for this harsh disease. A blood and bone marrow transplant is the only cure right now, but the National Heart, Lung and Blood Institute says it’s not for everyone. That’s because sickle cell patients need to have a relative who is close enough for a genetic match to be a donor.

What other treatments exist for patients living with sickle cell disease?

“Part of my treatment that I’ve been on are medications for the pain, and they put me on plasmapheresis,” Hannah said. “I used to do it every month, but now I do it every six weeks.” 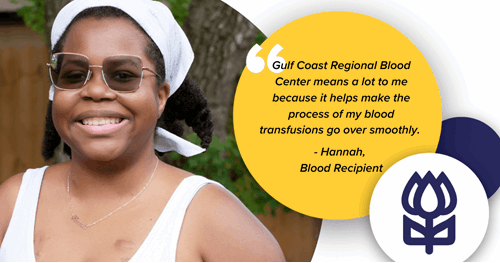 Plasmapheresis removes blood and circulates it through a machine where the blood is separated into red and white cells, platelets, and plasma. African American blood donors are more likely to be a match for most individuals with sickle cell disease in the United States, making them ideal donors to help patients receive regular blood transfusions. The Centers for Disease Control and Prevention says one in three African American blood donors is a match for a sickle cell patient.

“Donors who give blood, thank you! You’re literally saving my life and making my life easier,” Hannah said.

Help our sickle cell warriors in the community and make a blood donation today!

If you have sickle cell disease, the Greater Houston Area offers resources for you: